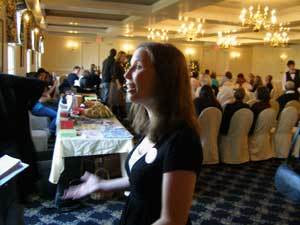 Two items concerning free speech caught my eye on the Drudge Report today.  One I viewed with hope, the other with appall.
The hopeful story comes from Cuba via the New York Times.  In spite of the repressive Communist regime, young people are using technology to spread news and information around the island.  Apparently, they're illicitly logging on to the internet, watching foreign television on smuggled satellite dishes or even using digital cameras to record what they see first hand.  The gathered news is then passed around from one person to the next by memory stick or flash drive.  As technology leaps forward in Cuba, the government can't keep up.  The trickle of outside information into the country is turning into a flood.  One day soon, we can only hope, it will wash the Raul nee Fidel Castro regime right into the Caribbean Sea.
The appalling story comes from Connecticut via the Associated Press.  Lewis S. Mills High School in Burlington prohibited a student from serving on the student council because she posted comments critical of the school's administration on her own internet blog.  Avery Doninger's comments were a tad vulgar and definitely juvenile (she is just 17) but they were made from her personal computer, in her home, and on a website unaffiliated with the school.  Apparently a judge in Connecticut believes that the First Amendment does not apply to high school students at home on their own computers and denied her request for an injunction.  The case is currently on appeal.
Isn't it sad that when free speech seems to be on the rise in Cuba, it seems to be on the decline right here at home?
Posted by St. Louis Conservative at 11:40 PM

What if it was Nancy Pelosi blogging about President Bush with the same vulgarity?

Would that also call for First Amendment protection? Or would she be forced to resign in shame?

Or do we want to let up and coming politicians to think it's appropriate to use fowl language to describe their advesaries on the other side of the table?

Okay well, chicken language is probable okay, but what about foul language?

And there I go again, misspelling 'probably'. I'm just going to stop now.

Nancy Pelosi definitely has the right to use whatever language she wants when talking about President Bush or anybody else. As a public official, she may or may not be held to account by her constituents for whatever she says. But she has the right to say it and government wouldn't be allowed to prevent her from doing so or to prevent her from serving in the House of Representatives.

The First Amendment doesn't apply to parents, of course, just government, so the question about parents disciplining children doesn't really apply. But, in this particular case, the mother told her child to apologize in person to the superintendent, which she did, and the mother is presently supporting her daughter's position wholeheartedly.

And, no, teachers should not be allowed to discipline children for things that they say off of school property, away from school functions, and on their own time. "Probable" even if they do use "fowl" language. ;-)