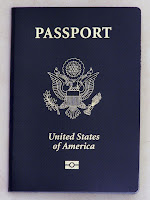 Today, the Washington Times published the first of a three-part series revealing the U.S. Government's outsourcing of the manufacturing of passports to foreign companies.  This alarming article by Bill Gertz raises the obvious security concerns.  I won't fully rehash those concerns here (since you can click on the link and read Gertz's article yourself) but just imagine . . . blank American passports are being assembled in Europe and Thailand before being shipped to the U.S.
There is no way to be sure about the security of those blank passports.  With a blank American passport, Osama bin Laden himself could get past our customs agents.
Why on earth would our federal government outsource production of the very documents that allow a free pass through our border security?  Well, Gertz answers that question too . . . money.
The Government Printing Office is turning huge profits on passports.  Profits are being given a higher priority than security.  And those profits are being turned by charging ever-higher fees to Americans for those passports.  To what end?  The Government Printing Office was designed to break even.
This makes even less sense than allowing the European consortium Airbus to manufacture the U.S. Air Force's new tanker.  Stop the insanity now!
Posted by St. Louis Conservative at 10:47 PM

Hopefully, now that this is out in the open, it will go the way of the Dubai controversy. Seems like two things that today's Republicans are good at exporting are jobs and money. (Unless, of course, they can get the money to flow into their pockets instead of foreign markets.)

That's a bit of cheap shot. But in this specific instance, the export of this project is just stupid. Hopefully, shedding light on the subject will make it go away.

I agree, it's stupid. As is the Airbus deal, and as the outsourcing of port security to Dubai would have been, had it not been discovered. But it's just par for the current Republican course - not suprising at all.

Republicans allow for free market to govern prices and salaries. I can understand that. Sounds good.

Here's the problem: Foreigners are willing to work at lower wages, particularly those in developing countries. So, without some type of regulation, manufacturing jobs, telemarketing jobs, and anything that anyone can be trained to do regardless of education is being sent overseas.
The jobs that can't be - the service industry for example, are all being filled by foreigners here, be it legal or illegal, because Americans are to good to do it for market wages.

Under the Republican free market philosophy, it won't (can't) reverse itself until the standard of living in every other country in the world is on par with that of the U.S. That will eventually happen, and then will have some sort of world utopia, but it's a lonnnggg way off, and we're in for some rough economic times between now and then.

So, what to do? No government contracts to foreign companies? So the U.S. company that gets the governemnt contract can jack up the price to whatever they want because all of their American competitors are out of business, since all the private sector business got shipped overseas.

Doesn't work. There's got to be some sort of incentive make it economical to keep jobs in the U.S. Rebublican aren't about to do that.

Americans need to get of their collective butts and put forth an effort to design and manufacture quality products, and stop expecting to get rich doing nothing.

The fact that we are still using archaic technologies like paper and photo IDs is ludicrous. Doesn't really matter if blank passports are manufacutred here or elsewhere, all it takes is to grease the right palm to get a box full.

Sorry for the ramblings.

You're sure painting the GOP with a broad brush today. I think that it may be best to take these issues one at a time. And on the one at issue now, we agree.

Say something nice about Democrats, I'll rail on them for a while ;-)