Another Small Chink in the Armor of Global Warming Hysteria 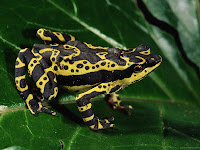 In 2006, researchers "identified" global warming as the "trigger" for chytridiomycosis, which is causing severe declines in populations of the harlequin frog in South and Central America.  Just last year, the Intergovernmental Panel on Climate Change touted the '06 study.
Too bad it was wrong.
The New York Times is reporting on a study to be released tomorrow that studied the issue and "found no evidence that climate change has been driving chytridiomycosis."
Watch out for scientists drawing politically correct conclusions.
Posted by St. Louis Conservative at 11:11 PM

I'll give you this one, SLC. They're reaching here.

Although "wrong" might be a touch strong - perhaps "unproven" or "without merit" would be more appropriate.

I'll settle for that anon.

This is another example of the media and global warming activists wishing so hard to be right they will print anything to prove their case creating more unfounded hysteria. These activists know that the original story will make headline news creating more hysteria while the retraction will make a "ho hum" on page 10.
RW