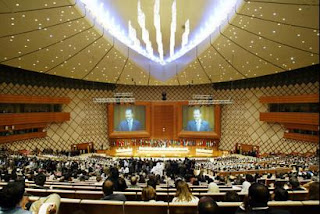 Leaders of 57 Islamic countries met in Senegal this week and urged that new laws be created to allow Muslims to sue freedom-loving nations which allow "anti-Islamic speech."  Those leaders believe that their religion is under increasing attack in the West and want to outlaw "blasphemous" cartoons, speech or depictions of Islam around the world, not just within their own borders (which is bad enough).
According to an AP report on the Organization of the Islamic Conference, the conference chairman claimed that freedom of speech did not include the right to blaspheme Islam.  Further, he said, "there can be no freedom without limits."
That's ridiculous.  Freedom requires the freedom to say unpopular things.  Otherwise, a tyranny of the majority view is inevitable.  Western nations recognize that.  Our national sovereignty must be defended.  No international accord should regulate what speech is allowed or is not allowed in any other nation.
In addition to creeping international political correctness, the measure is also hypocritical.  Muslim nations would not be punished for allowing anti-Semitic or anti-Christian speech.  Only that which is "blasphemous" would be subject to legal attack.  But who gets to decide what is blasphemous?  I suspect that the Islamic nations want to decide.  I doubt that they would consider a claim that Jesus Christ was merely a prophet, not God, to be blasphemy, but a Christian would.  Why wouldn't that be prosecuted to the same extent as a cartoon depiction of the prophet Muhammad?  Because what is good for the goose is not good for the gander.
And the historically Christian nations in the Western world value freedom of speech.  Our nations are stronger because of the open marketplace of ideas.  That includes religious ideas.
The 57 leaders who met in Senegal should worry about their own nations - and possibly extending freedom to their own people.  They should stop worrying about how to limit freedom elsewhere.
Posted by St. Louis Conservative at 11:39 PM