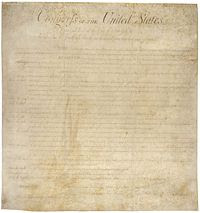 Violence interrupted democracy in Kirkwood on February 7.  Charles "Cookie" Thornton leaped from loudmouth to killer and took the lives of five innocent people.  Now, his criminal actions threaten to take a small piece of liberty from all of the rest of us.
Public officials in municipalities around the area, and probably around the country, are grappling with security in the wake of the Kirkwood killings.  As the Post-Dispatch reported today, some are wondering how to deal with their own local gadflies.  Some are installing metal detectors.  Others are posting armed guards (though the guards were the first victims in Kirkwood).  Pine Lawn, apparently, "has voted to bar anyone it deems disruptive from public meetings."  Would Pine Lawn have barred Martin Luther King, Jr., from its meetings in the 1960s?  Many southern cities would have deemed him disruptive.
While Pine Lawn's motives are understandable, that city has gone too far.
Security is important.  Let there be no doubt about that.  Public officials certainly have the right and even the duty to protect themselves and attendees at public meetings from violence.  But citizens, loud or not, with popular opinions or not, must be allowed access to government.
The problem is that government shouldn't be allowed to decide whose voice is heard and whose voice is kept silent.  The Bill of Rights protects some of our most fundamental freedoms as Americans.  Among those rights are the right to free speech and the right to petition our government with grievances.  We must not allow Cookie Thornton's violence to chip away at those freedoms.
Posted by St. Louis Conservative at 11:09 PM