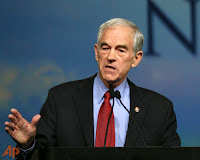 I'll admit, I wrote off Ron Paul early in the Republican presidential primaries.  He was a fringe candidate who seemed to have no shot of winning the GOP nomination or the presidency.  As it turns out, I was right.  Paul didn't win or even come close.
But despite losing the election, Ron Paul has not faded away.  He's still out there and his operatives are still working.  According to a blog at the L.A. Times, his "forces" are planning to stir things up at the convention in September.  They're planning platform fights and pushing for their guy to get a prime speaking slot.
What's behind Ron Paul's staying power?  That's an easy one . . . the "moderation" of the Republican party.  Through the efforts of the Bush family and now John McCain, the Republicans have discounted their conservative base and counted on us to vote for them because we have no viable alternative.  We have, and will again this fall but we're getting a bit fed up.  I'm tired of the party trying to outspend the Democrats and tired of it succeeding.  I'm tired of appeasing liberals but that is how Republicans have chosen to try and gain or keep political power.  McCain is the poster-child for that kind of thinking.
Ron Paul's supporters are tired of that too.  They've had enough and want to make a stand now.  I give them credit.  I'm not sure that their efforts will benefit the country, now or in the long run.  I'm certain that those efforts will hurt McCain and, by hurting him, make the election of Barack Obama (ugh!) or Hillary Clinton (ugh! ugh!) more likely.
I am not a supporter of Ron Paul.  A friend of mine is and has been threatening to make me read Paul's latest book.  I've been laughing him off.  I'm not laughing anymore.  Now I'm curious.  I'll read the book to try and figure out if this unlikely man is likely to remain on the fringe or if there is a chance that he will some day lead the Republican party back to the right and back to doing what is right for the country.
Posted by St. Louis Conservative at 12:03 AM

Baldwin is the nominee of the Constitution Party, and mentions support for several of Congressman Ron Paul's bills.

I'm not yet convinced that a protest vote against McCain is the best way to go. But stay tuned.

Who said anything about a protest vote?

The Constitution Party is *THE* truely conservative party now. Republicans don't "get it" any more. I don't know what they think they're up to, but cutting taxes doesn't work if your going to continue to spend yourself into oblivion trying to solve the world's problems. (Isn't that what liberals are supposed to do?)

So you can have a liberal Democrat, a "more of the same" Republican, or a true conservative.

It's time to think outside the box.