What will conservatives to without Sarah? Nothing. She's not going anywhere. 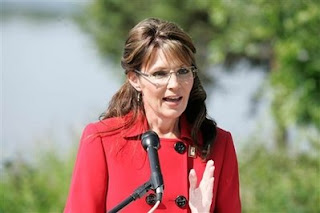 Alaska is a long way from here - wherever here is.  And, it take a long time to get to and from there from here.  Transit, and governing a state (not to mention being a wife and mother) take one heck of a lot of time.  So much, in fact, that running for president would be difficult.  So, in what was a surprise - at least until we had time to think about it - Sarah Palin announced Friday that she was resigning as Alaska's governor.
And now, she's off and running and announced on her Facebook page that she has a "higher calling."  She wrote about her desire to unite the country behind conservatism, citing "our values of less government intervention, greater energy independence, stronger national security, and much-needed fiscal restraint."  (Link to story here.)
All that I have to say at this point is . . . run Sarah, run!
Posted by St. Louis Conservative at 9:38 PM

I agree. I am also a St. Louis conservative. Good luck with your blog, I'll keep track now that I've found it.

Has anyone noticed that Sarah Palin is attractive?

She is undeniably attractive and intelligent, no matter what the IQ deficient liberals may think.

Has anyone noticed that almost ALL liberal women are very unattractive? Especially the pro-abortion zealots!